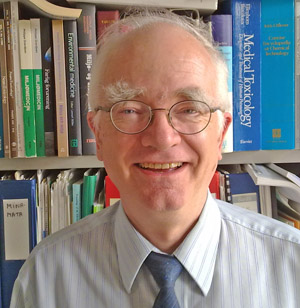 At Healthy Child, we’re extremely fortunate to be able to rely on the top thinkers in the environmental health realm when we have questions. It occurred to us that we should share this wealth. So we’re launching a new blog series where we ask one of our advisors or colleagues five questions about their work in the children’s environmental health field. First up? Five questions about chemical risks and children’s brain development answered by Dr. Philippe Grandjean, professor of environmental medicine in Denmark and at Harvard School of Public Health. He lives in Copenhagen, Denmark and in Cambridge, MA, and travels widely to study environmental problems and to examine children whose lives have been affected by pollution. He is also the author of Only One Chance.

ADHD, autism, and spectrum behavioral abnormalities are on the rise among children. Lead and mercury exposures are so prevalent that we can calculate their cost in lifetime earnings at billions per year. Meanwhile doctors aren’t educated to pay attention to prevention; our entire health care system is built instead on diagnosis and treatment.

“We have a big problem,” says Grandjean. “Our bodies are being invaded by industrial chemicals. We never asked for it. We never approved it. We were never informed about it. In every single blood or human milk sample we find tons of industrial chemicals. You could argue that—and I think particularly that women should argue that—we have the right to know what’s inside us. The least society can do is make information available on how much we have accumulated and how much we’re sharing with our kids.”

Given that, as Grandjean says, “the chemical industry will never agree that it’s any problem that we’re all exposed to chemicals from the day of conception,” we asked him the following questions about safeguarding our kids’ brains.
1. What is chemical pollution and how does it impact a child’s brain?

That is chemicals in the wrong place. They may come from air pollution, consumer products or environmental pollution. Many of these chemicals can pass from the pregnant woman to her child, and they also make their way to the brain. Our brains are so complex that their development is uniquely sensitive to adverse effects from pollutants.

2. What can the individual—mother or family—do to protect children from harmful chemicals?

That’s the most difficult question of all. The chemicals we deal with—you can’t see them and you can’t smell them or taste them. Often times the labeling doesn’t mention them so there isn’t much you can do even if you want to. But there are certain things, let’s say paint fumes at home or strong cleaning agents that can be avoided. Choose organic food, especially during pregnancy and for baby food. When I look at the pesticide levels in conventional vegetables and fruit, I see there are residues. I think the limits used by the FDA are too high. We are now learning that exposures we said were safe in the past are no longer safe. Instead of hoping everyone will be fine, we should take action.
3. What about pesticide use at home?

Simply don’t do it. Enjoy whatever plants come up in your garden. Don’t use those chemicals, especially when a woman is pregnant or kids are playing in the grass.
4. How can environmental chemicals hurt child’s growing brain?

It’s not clear what they’re doing, but we know the results. They are generally subtle – often just a matter of a few IQ points or some attention deficit—and we have to look at this on a population level before we can be sure what’s going on. However, we need to protect every single brain cell and IQ point, as optimal brain function is so crucial to all of us. It is different from all other organs. You can donate a kidney for transplantation and live happily with the one you have left. But the brain is different. We have not appreciated that when we started to regulate industrial chemicals. This is really serious.

In addition, we generally assume all of these chemicals are safe – only a small minority is regulated at all. If you look at whole U.S. population of children and calculate IQ points lost because of, say, organophospates , it’s huge. Some of the children appear normal but don’t we want the next generation be as smart as if not smarter than us? The brain is such a treasure. We need to protect it vigorously.

5. Do parents need to get more active than they are?

Every mother and every father are voters and consumers. Whenever they have the opportunity, they should ask decision makers and product producers or vendors, What are you doing to control hazardous chemicals, particularly those that can affect my child’s or my baby’s brain development. We must ask for products that are free of BPA, PFOA, phthalates, solvents, pesticides, and other harmful substances. When consumers started to ask for BPA-free baby bottles, the stores and manufacturers had to comply. We need to put the same kind of pressure to make sure that what we buy does not contain chemicals that are toxic to the brain. When those questions are asked frequently enough it will make a difference. There is scientific support, my book refers to over 500 sources of information on what I call chemical brain drain. We ought to worry a whole lot more than we have in the past about making sure our children and their brains are safe.