Here are the things that made me itch late last week: a fragrance insert in the revamped T: The New York Times Style Magazine, and the (delicious) tiny tangerines I was given for Valentine’s Day.

I have a fragrance allergy (yes, I have been patch-tested). I know why the oranges made the eczema on my hands flare as I peeled them. But that stinky fragrance insert? I have no clue. When it comes to natural essential oils like citrus, it’s obvious what’s bothering me. But when it comes to fragranced products, I can’t tell you what’s triggering my reaction because manufacturers aren’t required to disclose their ingredients. Their formulas are government protected trade secrets, which means the word “fragrance” on a product label is just a catchall term. “Fragrance represents hundreds of different chemicals in a mixture,” explains Alexandra Scranton, Director of Science and Research for Women’s Voices for the Earth (WVE). This means one bottle of lotion with “fragrance” might contain a different mix of chemicals from another with “fragrance.” 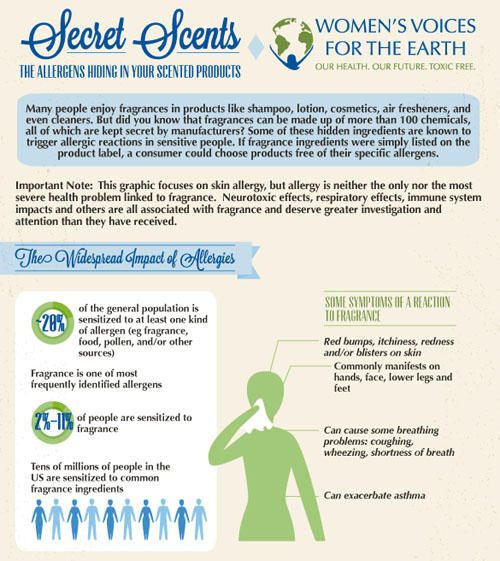 There might be a fragrance I could wear, technically, but because of the veil of secrecy the fragrance industry is allowed, no one knows what chemicals—or allergens—are in any given product (including kids products). Consumers aren’t in a position to know what is or isn’t safe for them, and neither are dermatologists or researchers. “The industry isn’t giving out the information so we can figure this out. We have evidence of chemicals of concern but we need more information to be able to make those correlations. We need disclosure,” says Scranton, the report’s author.

My situation is far from unique. According to the WVE report, many people are similarly affected by the unknown chemicals found in fragrance and allergic reactions are on the rise, especially among children. Maybe my new babysitter’s perfume was the reason my infant’s face was red and bumpy last week? I know for sure it wasn’t from Dolce & Gabbana’s new baby perfume (yes, baby perfume), since I’d never use the stuff!

Beyond skin issues, many people—kids and parents alike—have respiratory reactions, too. It’s not enough for the industry to tell millions of rashy and wheezy citizens to just use fragrance-free products. There aren’t enough and often they’re not very good. Besides, the scent-allergic are surrounded—by people with fragrance wafting off them from everything from shampoo to moisturizing lotion, as well as by things like sheets and towels at hotels and gyms and even robes at doctor’s offices, which are doused in the stuff via detergents and dryer sheets.

The industry stance, Scranton says, is that secret fragrance formulas are the lifeblood of their business, even though people can reverse engineer formulas. There are no laws requiring disclosure in the United Sates, while in the European Union they have called out 26 allergens that do have to be disclosed on labels, and they may add more.

Meanwhile the diagnosis and treatment of people with allergies is being hampered because dermatologists and researchers can only go on trial and error. They can’t test for specific fragrance allergens. “What if you were having stomach aches and you were told you were allergic to food? Well that’s ridiculous. That’s not helpful,” says Scranton. “Everything else is this kind of tree pollen or cat or dog. Fragrance is a mix of things, some of which you might be allergic to or not. All you’re told is avoid it all together.”

There are other effects of fragrance, but WVE’s report is specifically about skin allergies. WVE is asking the International Fragrance Association North America  to make disclosure their policy. “We’re not talking about cancer; we’re talking about rashes. We’re just asking for disclosure so people with allergies know what they’re dealing with,” says Scranton. “It’s a reasonable ask.”

Who can argue with that?